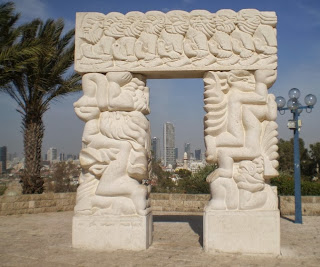 A large statue, made of Galilee stone, stands at the top of Abrasha Park in Old Jaffa. It’s called the Statue of Faith or the Gate of Faith. Until Herod the Great built the grand port city of Caesarea, Jaffa [ancient Joppa] was the only port in Israel of any size. Therefore in Bible days, it was the main means of Israel’s import/export of people and goods.

The statue consists of three pillars [two standing and one lintel], each about 12 feet in length, and assembled to look like a gate. It is the “gate of entry” into the Land of Israel, and represents the promise of the Land to Israel’s Patriarchs— Abraham, Isaac, and Jacob.

The Patriarchs are carved into the two pillars, represented by Abraham’s binding of Isaac [Genesis 22] and Jacob’s “Stairway to Heaven” dream [Genesis 28]. The lintel depicts the capture of Jericho [Joshua 6]. The promise of land was first given to Abraham, then to Isaac and Jacob, which began to be realized through Joshua. 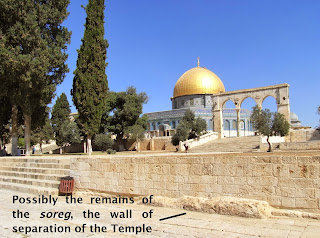 Click on photo to enlarge it When you ascend the Temple Mount in Jerusalem , you may think you are seeing the remains of what ancient worshipers saw when they were there. That is hardly the case. The Temple was destroyed by Titus in 70 AD, then Hadrian   leveled the area again in 135 AD. Since then, while under Muslim control, nearly every vestige of the Temple has been removed. There may be an exception to that - the remains of what Rabbi Chaim Richman and some archaeologists identify as the base of the soreg . The soreg was a low retaining wall that surrounded the Temple and served as a boundary—a line of demarcation or separation. No one was permitted to ascend beyond that point unless they had gone through purification rituals, and were otherwise permitted to “draw near to God.”   There were signs posted on the soreg in Greek and in Latin that warned unauthorized people against entering the area of the Holy Temple. The signs warned that anyone who went beyond the 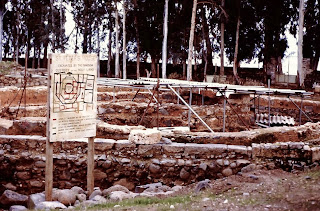 Capernaum - The House of Peter

This was my first photo of Peter's House at Capernaum in 1969 Click on photo to enlarge it This is how it looks in 2012. A Catholic Church covers the area believed to be Peter's House. Click on photo to enlarge it The House of Peter is an ancient residence at Capernaum that has been an object of attention since the 2nd century AD. Archaeologists have uncovered a house and subsequent house church that contains ancient writings in the wall itself mentioning Jesus as “Lord” and “Christ” in Aramaic, Greek, Syriac and Latin. The structure is very close to the ancient synagogue at Capernaum and when excavated, 1st century fish hooks and graffiti references to “Peter” were found.  Due to its location and early treatment as a Christian pilgrimage site, a large octagonal Byzantine church was erected over the House of Peter in the 5th century. Since that time, Christians have referred to this site as the House of Peter. In biblical accounts, it’s here where Jesus s 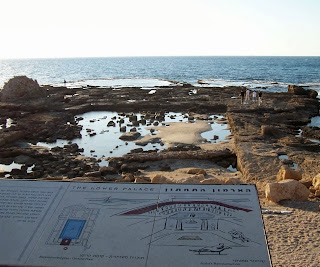 Click on photo to enlarge it Another one of Herod the Great’s construction marvels was his palace and Roman Praetorium in Caesarea. Built right into the Mediterranean Sea, it offered a most spectacular view: Westward, the Mediterranean; Northward, the port of Caesarea; Eastward, the hippodrome, other dignitary’s mansions and the business district; Southward the Theater.  Artist conception of Herod's palace in Caesarea  Click on photo to enlarge it The palace consisted of two main units: the lower palace comprising the private wing, and the upper palace housing the public wing. The upper palace, built around a courtyard, was associated with Herod’s judicial and administrative functions, as well as the reception and entertainment of dignitaries. And there were many as Caesarea was the Roman capital of Judea for hundreds of years.   Click on photo to enlarge it